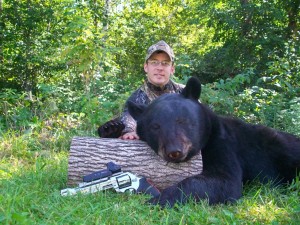 As a Mainer, I grew up in hunting.
Addicted at the age of 6 when I witnessed my grandfather shoot a whitetail while I was tagging along, sucking on a lolly-pop.  I knew from that moment, that hunting was in my blood, and one of my main purposes in life was going to be to share those adventures with others.

I took my first deer with my uncle beside me at the age of 11, and the feeling of adrenaline rushing through my veins has never stopped. I’ve dedicated my life to becoming the best woodsman I could become, and being a good steward of the wilderness has always been a big part of that. When I’m not hunting, I’m thinking about hunting, and or watching my childhood hero’s of hunting like Tred Barta, on the television.

To say that the passion runs deep in my blood is an understatement.
Now as the owner of Trident Armory, I feel that I have the opportunity to spread the word about our product line, but more importantly introduce more people to the outdoors, and bring some of the adventures I enjoy to their living rooms. 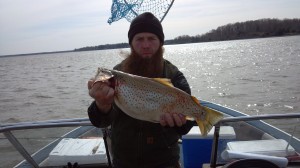 I’ve been fishing about as long as I can remember.I learned how to fly fish when I was in third grade, and started tying flies right around the same time. My passion for fishing continued, and as I grew a little older I opened up a bait and tackle shop off of my parents front porch when I was about 13 years old in the upper peninsula of Michigan.I ran my bait shop for a number of years, and during that time was privileged to sell bait to some of my hero’s, professional walleye fishermen Gary Roach and Mark Martin. For me, it was a bigger deal then meeting a movie star.
I grew up watching outdoors TV, and watched folks like Al & Ron Lindner and the In-Fisherman crew almost religiously.
When I was 18, I moved to Maine – and here I’ve been ever since. I still deeply love fishing, and am an avid trapper and hunter.

Trident Outdoors is the culmination of thousands of hours afield, and we hope that by sharing that with you we may be able to inspire you to take some time afield, and share the great outdoors with the next generation.